This is a 3D Text project which requires installation of a custom font (provided). Also required: a Mac with at least 1GB of vRAM (gpu) and Final Cut Pro 10.3.4 or higher. Includes user guide and required font.

Split-flap board from the train stations of old

Solari Strip is an array of 14 character slots with a “split-flap” animation. Each character can be turned on or off to create “complex” arrays of characters for your illustration work (or simply a line from 1 to 14 characters long). Combine multiple generators for more complex layouts.

Solari Boards have been traditionally used in train stations and airports for destinations and arrivals.

This generator for Final Cut Pro X is a working 3D model of the face plates of a “flap board” designed to be as easy to use as possible. Set the playhead near the beginning and dial in the first character, move the playhead to the end and dial in the “destination” character. Set the starting time offset and the ending time offset and let it play. You can even devise the animation to go backwards! 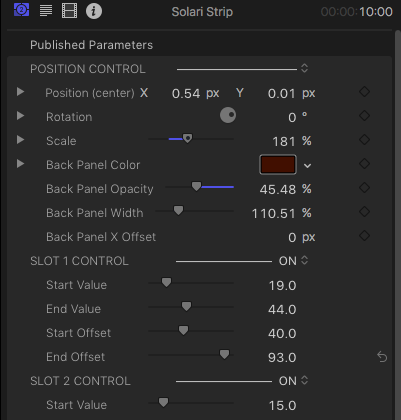