Feb. 23: Added an expansion pack which includes Laser Split V, a vertical split version and Laser Split – Flash, a “flash” version which has equivalent new features with the vertical split version plus two effects (Freeze at % and Hold To %) that can be used to freeze and unfreeze video clips at times you specify. These effects can be used on any clip, title or generator (to be applied to clips — it’s not possible to add effects to transitions.)

Laser Split allows you to create your own split with seven on-screen controls to draw the divider line in either straight segments or b-spline curves (similar to bézier curves).

The Laser Origin is the starting point for the laser light effect. It is usually off the edge of the Viewer somewhere, but can be “hidden” behind a Title or attached graphic. It can also be keyframe animated.

The Path Type allows you to change from Straight Segments between the OSCs and Curved Segements (B-splines are similar to Bézier curves, but the OSCs are not on the tangents, but are more like control points off the curve.

Laser Light allows you to set the core “laser” color (you’ll want it near white with a possible color cast, but play with it to see what you like.)

Laser Glow Color does what it says. Glow Amount sets the “spread” of the glow. Exposure and Intensity can be manipulated to adjust the glow effect.

The Point Color and Point Outer Color are very similar to the Laser Light parameters above. In cases where the background is white, or very bright, there is a Boost Point Flare addition. 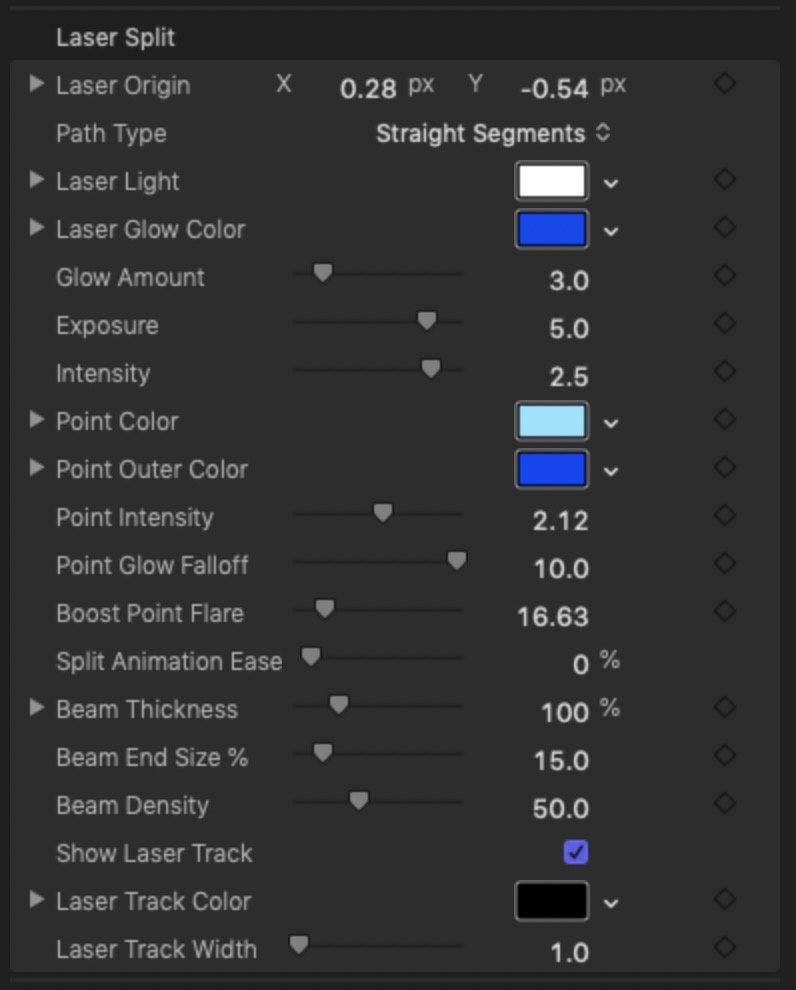 The Split Animation Ease give a modest amount of easing between the start point and the end point. The value goes between Linear at 0% to Ease In/Ease Out at 100%.

Beam Thickness will increase the size of the laser light effect and the Beam End Size % allows you to taper the end (to give it a perspective effect).

The Beam is made up of a series of circles spread over the line that represents the light trail. If you have trouble playing through the transition while setting up your customizations, set this value to 20, then reset it higher when you’re finished. You may also need to increase this value if you have the laser light go from one side of the screen to the other.

You have the option to show the laser “track” or not. If you choose to not show the track, the incoming clip will be cutout along the path. You can set the track width with the last parameter.